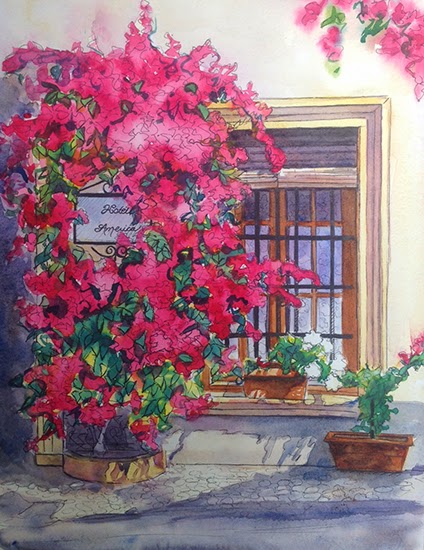 Hotel America
mixed media
11×14″
I had the wonderful opportunity to return to Victoria at the end of last week and teach another watercolor course. This time it was watercolor with pen and ink and the subject matter was windowboxes.
It was a fun art group from the Juan de Fuca Centre. Several were returning students plus a few new ones! As always, we had a great time.
I tried to show them how to loosen up with the paint and then to use a pigmented ink pen to define the subject. We also did a few exercises with line work.
Hotel America is one of 2 hotels at the Alhambra in Granada, Spain. Alhambra. The Alhambra is a Moorish palace and fortress built in the 800s. It is considered one of the wonders of the world. The Nasrid palaces are also some of the most beautiful buildings I have yet to see. I would like to paint them someday.