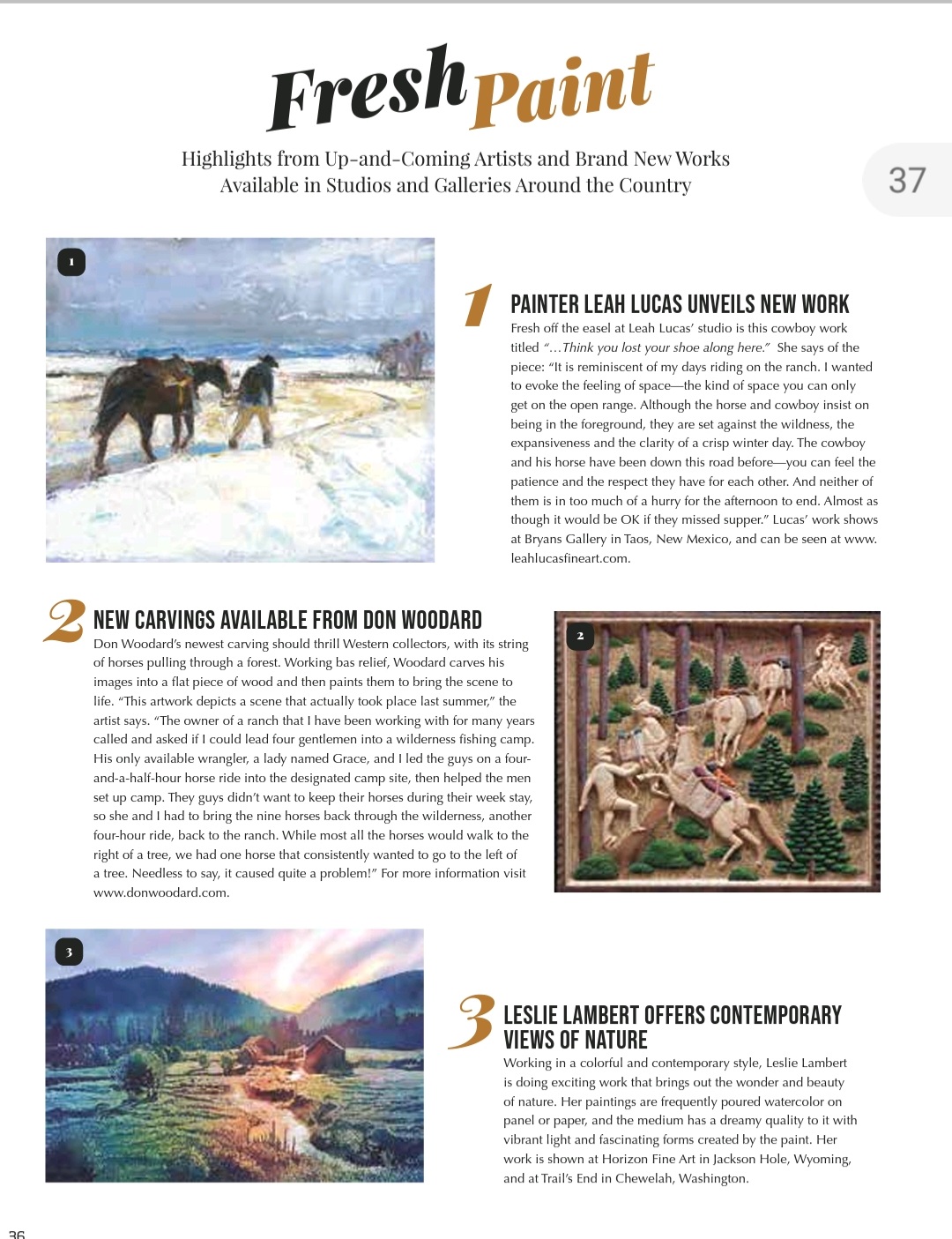 By Leslie LambertJuly 29, 2022No Comments 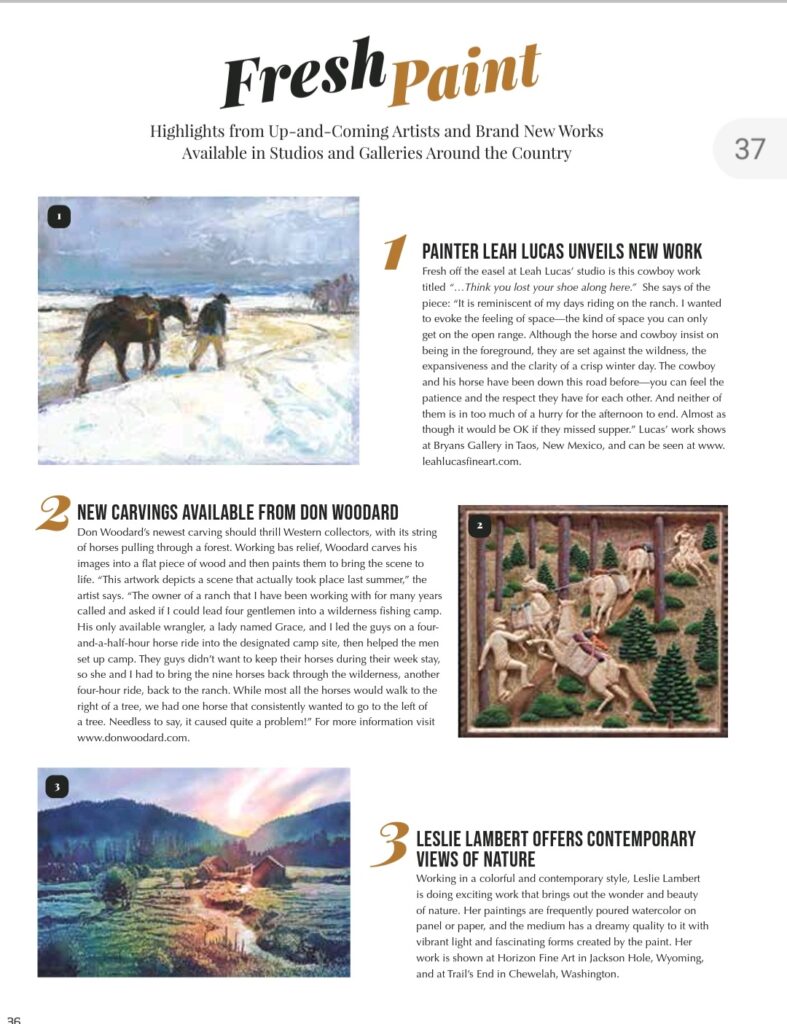 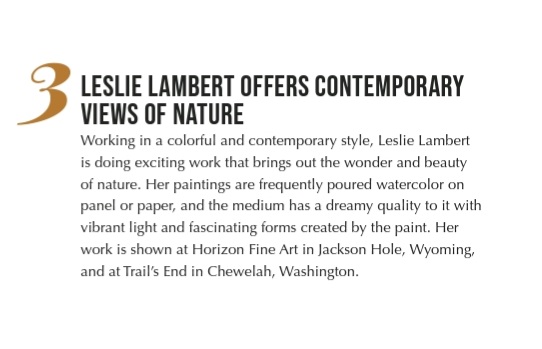 This past week the August issue of Western Art Collector came out and my work is in the Fresh Paint Section!

I have always wanted to be called a Western artist, even though I do mostly landscapes, I love painting Western scenes the most. Now I can call myself a Western Artist since I have been in Western Art Collector.

How this came about I think is a funny story and almost seemed too coincidental.

This past May I had the opportunity to attend the Plein Air Convention in Santa Fe, NM. It was an incredible week of attending demonstrations by some of the best plein air artists and getting to paint different areas of Santa Fe, including Georgia O’Keefe’s Ghost Ranch. I met and made several new artist friends and even met Eric Rhoads, the founder of Streamline video and Plein Air Magazine, while on the bus out to Ghost Ranch. I was over the moon about the experience and there were too many highlights of my week to mention here.

That is because one of the best parts of my trip to Santa Fe happened to be in the airport on the way home.

I actually left later than most of the attendees of the convention. The convention ended Saturday after our trip to Ghost Ranch. My flight did not leave until Sunday evening. I spent Sunday touring the galleries of the city but by early afternoon, I had enough and was exhausted. I decided to head out to the airport four hours earlier than I needed to be there.

Part of why I went so early to the airport was to try to rearrange my luggage. I am a sucker for art supplies and I was bringing home way too many, which meant my luggage was overweight. I needed to figure out how to best distribute that weight.

If you have ever been to the Santa Fe airport, then you will know how small it is. There are only about 3 benches in the waiting area. When I arrived, one of those benches was occupied by a man on a computer. I took the bench next to him and proceeded to pull apart my luggage. I caught him watching me with some interest and then he asked if I was an artist (probably due to the obvious abundance of art supplies.) I replied yes. He then asked why I was in Santa Fe and when I mentioned an art convention, he went on to say that he was in Taos for a fundraiser for the arts.

Was he an artist? No. A sponsor. Oh that’s great. The arts need sponsors.

He went on to ask me if I was represented by any galleries (which I am) and some more questions about my work. I showed him my poured watercolors and a few of my pieces on Instagram.

Finally, he asked for my business card. I handed it to him and only half-jokingly told him to keep me in mind for his next art event. I then asked for his.

That is when I realized that this man that I have been rambling on about my art to is Michael Clawson, the Executive Editor of Native American Art Magazine, International Artist Magazine, and Western Art Collector.

Wow! Was my first thought then, On no! I am talking to the executive editor of some of the largest art magazines in the country and it’s too late for my elevator speech! Instead, I had blathered (perhaps a little crazily) about my work as if nothing would come of it this conversation. (Facepalm!) Oh well. I’ll email him later and hopefully redeem myself.

However, I didn’t need to do that. Michael went back to his computer, and I went back to my luggage. I think he must have looked up my website because after awhile Michael turned to me and said he would like to feature me in the Fresh Paint section in Western Art Collector August issue. Can I send him some images for the magazine that coming week? Um, yeah. Sure. I can do that. Thank you for considering me for the magazine. (I was trying to play it cool here when I was actually jumping up and down inside!)

So there you have it, my work and a wonderful write-up by Michael Clawson is in the Fresh Paint section in the August issue of Western Art Collector.

It just goes to show that anyone can be a potential promoter or buyer of your work. Fate may have put me in the right place and the right time but I feel like hard work and an openness to discuss my art helped me to be considered for the magazine. It also helped to have business cards handy and even a portfolio on my phone (Instagram is great for this). But I learned that the elevator speech doesn’t always have to be some rehearsed discourse. Just be yourself when discussing your art. I certainly was being just who I am and look what happened.

And yes, I did order my mom a copy of the magazine.