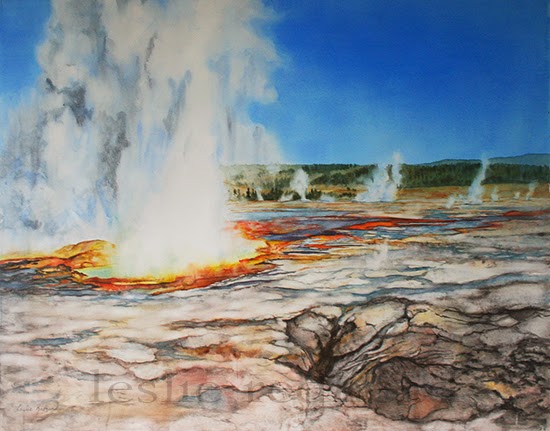 Water Clock
(also known as Clepsydra Geyser)
Yellowstone National Park
watermedia
32×40″
Clepsydra Geyser is one of the geysers in the Lower Geyser Basin in Yellowstone National Park. Clepsydra is a Greek word for Water Clock and was named this in 1878 when it would erupt every 3 minutes. After the earthquake in 1959, it erupts almost non-stop.
This painting is my current favorite. I varnished and framed it for a show that it didn’t get accepted into. Since I didn’t receive an acceptance notice, I assumed it didn’t get in and went and retrieved it from the gallery over the weekend. I apparently was to receive an official rejection letter but never did. Not so sure that I want an the official rejection letter. Those letters don’t seem to look as good on the wall of my studio.
Instead, the painting is hanging on my wall waiting for another adventure.